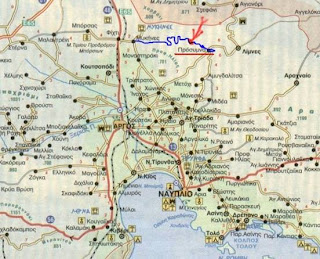 These astounding photos are from a recent archaeological discovery in Greece; this totally unexpected find furnishes proof of the existence of “Nephilim”. Nephilim is the word used to describe the giants spoken of in biblical times by Enoch as well as the giant David fought against (Goliath). It is generally believed that most of these Giants came about when the fallen angels had union with earthly woman. Note the incredible size of the skull Gen 6:4 (bene elohim-fallen angels) There were giants on earth in those days; and also after that, when the sons of God came in unto the daughters of men, and they bear children to them, the same became mighty men which were of old, men of renown. 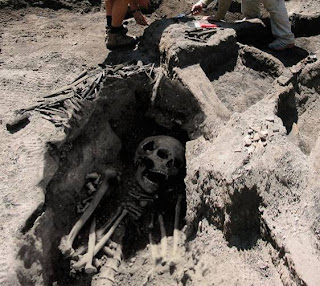 Num 13:33 and there we saw the giants, the sons of Anak, which come of the giants: and we were in our own sight as grasshoppers, and so we were in their sight.
There is a good reason we haven’t heard about this epic discovery in the New York Times, Scientific American, or any other legitimate publication, and that is that these photos, like the one circulating since 2004 purporting to show a giant skeleton found in the Middle East, are fakes.
As if it weren’t preposterous enough to claim that one 15-foot-tall fossilized human skeleton had turned up without media fanfare, we’re asked to believe that archaeologists recently dug up four of them in a single location (Greece). In point of fact, each of the photos appears to have been taken at a different time and place. 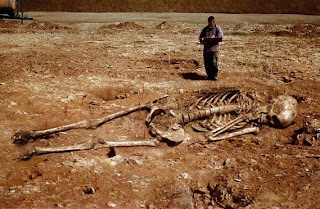 1. It was created by inserting an outsized human skull into a photo of a 1993 University of Chicago dinosaur dig in Niger, Africa (see the original here). Moreover, if you look at a blow-up of the doctored image, the skull appears flattened and unnatural.
2. Then it is a blow-up with brightness and contrast enhanced reveals unnaturally dark “shadows” around the skull. The skull in this is marked by incongruously bright highlights on the teeth and around the edges of the gaping temple wound. And in image #5 the shadows coming off the skeleton fall more or less toward the camera, while the worker’s shadow falls due left, suggesting that elements of two different photos were combined. 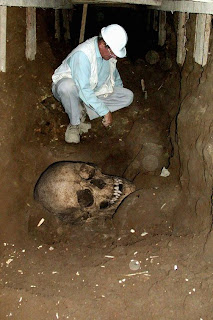 3. Despite frequent references to “giants” in ancient mythology and English translations of the Bible, there is no generally accepted scientific or historical evidence that such beings ever actually existed
For more interesting topics related to archaeology, visit archaeology excavations.
Posted by Archaeology at 10:06 PM 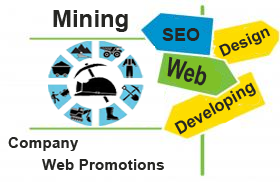