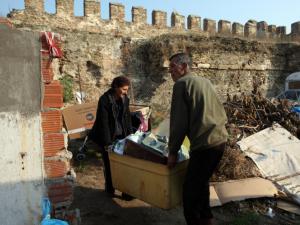 Athens - Archaeologists have unearthed an ancient marble covered Byzantine road during excavation work for a new metro in the northern Greek port city of Thessaloniki, the Culture Ministry said on Friday.
Dating from the third century BC, the marble paved road, known as the Via Egnatia, runs across much of modern day Thessaloniki at a depth of three meters.
Other finds range from hundreds of graves and tombs spanning an 800-year period from the fourth century BC, marble sarcophagi, stone tombs and more than 2,500 square meters of ancient buildings.
Many of the burial sites contained offerings, including 1,500 pieces of jewellry made of gold, silver and copper, Roman-era gold coins from Persia, clay vessels, glass perfume-holders and eight golden wreaths.
Founded in the fourth century BC by King Cassander of Macedonia, Thessaloniki emerged to become a major city through Hellenistic and Roman times.
The metro also runs beneath the city's historic Jewish cemetery, which was one of the largest in Europe and is believed to hold more than 300,000 graves.
The 9.6-kilometre network is expected to be completed in 2012. - Sapa-dpa

Posted by Archaeology at 8:05 PM